Madame Clicquot was a 19th Century widow (‘veuve’ in French) who took control of her late husband’s champagne business and built it into what is today.

Officially known as Veuve Clicquot Ponsardin and formed almost 250 years ago. Today it’s one of the biggest (and coolest!) French Champagne brands in the world.

“Only one quality, the finest” was Madame Clicquot’s motto. Only the finest gets issued with a Royal Warrant by Queen Elizabeth II that’s for sure. Yep, Liz loves a cheeky little flute of Clicquot now and again so keeps a stash in her royal cellars!

Having her royal highness sip your Champagne regularly? Well that’s just priceless. So is the bottle they found north of the border in Scotland back in 2008. Hiding in a sideboard in a castle at the Isle of Mull was a perfectly preserved bottle of Clicquot, dated from 1893! The bottle is the oldest known bottle of Clicquot, it’s on display at the Maison Clicquot in Reims and officially priceless.

This is a mega six litre sized bottle called a Methuselah – the equivalent of 8 standard sized bottles, enough to fill around 64 flutes. It’s presented in a Clicquot branded wooden crate that’s nailed shut. A six litre bottle of the finest, the coolest, the classiest Veuve Clicquot. Is there any better way to celebrate? Doubt it!

Please note: We order this item as required. That means you’ll need to give us an extra 1-2 days on top of our target delivery times to get it to you. 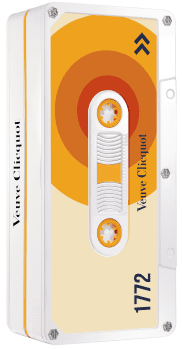 Hi. Please be aware there are courier delivery delays at the moment. Thanks for your patience. Dismiss