"Complexity on a level only a handful of distilleries in the world can even dream of reaching."

Known as one of the great peaty, smokey single malts – Ardbeg Uigeadail Single Malt Whisky won’t disappoint if you’re after a bigger, peatier, smokier style of whisky that’ll put hairs on your chest.

Pronounced oog-a-dal it’s a special vatting that combines Ardbeg’s signature smoky style with the sweeter, raisin like flavours from the old Sherry casks it spends time in. Voted “World Whisky of the Year” in 2009 in Jim Murray’s Whisky Bible. Jimmy boy said “complexity on a level only a handful of distilleries in the world can even dream of reaching.”

Ardbeg’s whiskies are out of this world. No, seriously you’ll find some of them orbiting on board the International Space Station at 17,000 miles per hour! Crazy we know, but Ardbeg are actually taking part in a study on the effects of zero gravity on maturation! 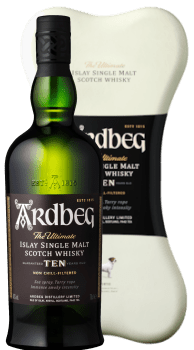